How to Freeze Tomatoes

Freezing fresh tomatoes is a great way to have garden flavor later in the year! Guide includes how to freeze whole tomatoes, diced tomatoes, or sliced tomatoes. No special equipment necessary.

Can you freeze tomatoes? Yes! We’ve been freezing fresh tomatoes for about 8 years now and it’s the easiest way to put them up for the year without canning. We love using frozen tomatoes in homemade soups and sauces later in the winter. Try them in our Vegetable Soup, Easy Vegetarian Chili, or pasta sauce recipes.

Freezing tomatoes only takes a little time and can be done in a few ways: whole, diced, or sliced. Pick whatever method of freezing them works best for you.

Should tomatoes be frozen or canned?

Freezing tomatoes is best for:

Canning tomatoes is great for:

What Type of Tomatoes Can I Freeze?

Any variety can be frozen, though I typically freeze heirlooms, slicing tomatoes, and Romas. Cherry tomatoes can be frozen whole for convenience. The photos here are of Better Boy tomatoes I brought back from my family’s farm in Virginia.

How to Prep Tomatoes for Freezing:

How you prepare tomatoes depends on how you’re wanting to freeze them. Tomatoes do not need to be blanched for freezing but if you prefer to peel them (we don’t)– you will need to blanch them long enough to help remove the skins.

How to Use Frozen Tomatoes: 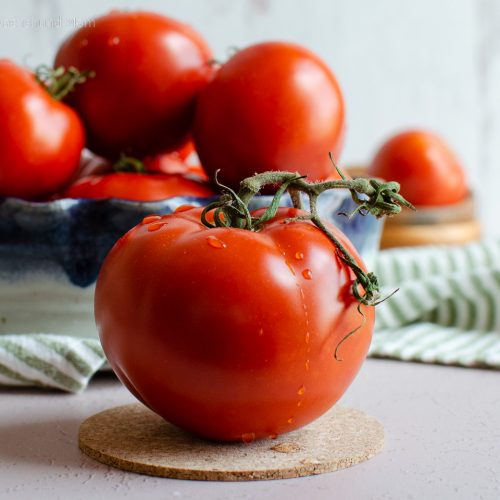 How to Freeze Tomatoes

For Diced Tomatoes (recommended for most uses later):

For Whole Tomatoes (best with Romas or other small, sturdy varieties):

For Sliced Tomatoes (use on pizzas, tarts, in fajitas, etc.):

1 pound fresh tomatoes = 3 medium tomatoes; yields 1.5 to 2 cups chopped, or 9-10 slices For any method above, if peeling first is desired: Tomatoes are good for 1 year after freezing but taste the most fresh within 6 months.

Serving: 4ouncesCalories: 20kcal
Keyword Freezing Tomatoes, Frozen Tomatoes, How To Freeze Tomatoes
Tried this recipe?Let us know how it was!
Author: thedachshundmom
Filed Under: Basics and Staples, How To, Recipes
Tags: Freezing, Garden Veggies, How To, Preserving, Southern, Tomatoes
Chocolate Glaze for Donuts
Movie Night Popcorn and Candy Cookies

2 thoughts on “How to Freeze Tomatoes”

This site uses Akismet to reduce spam. Learn how your comment data is processed.